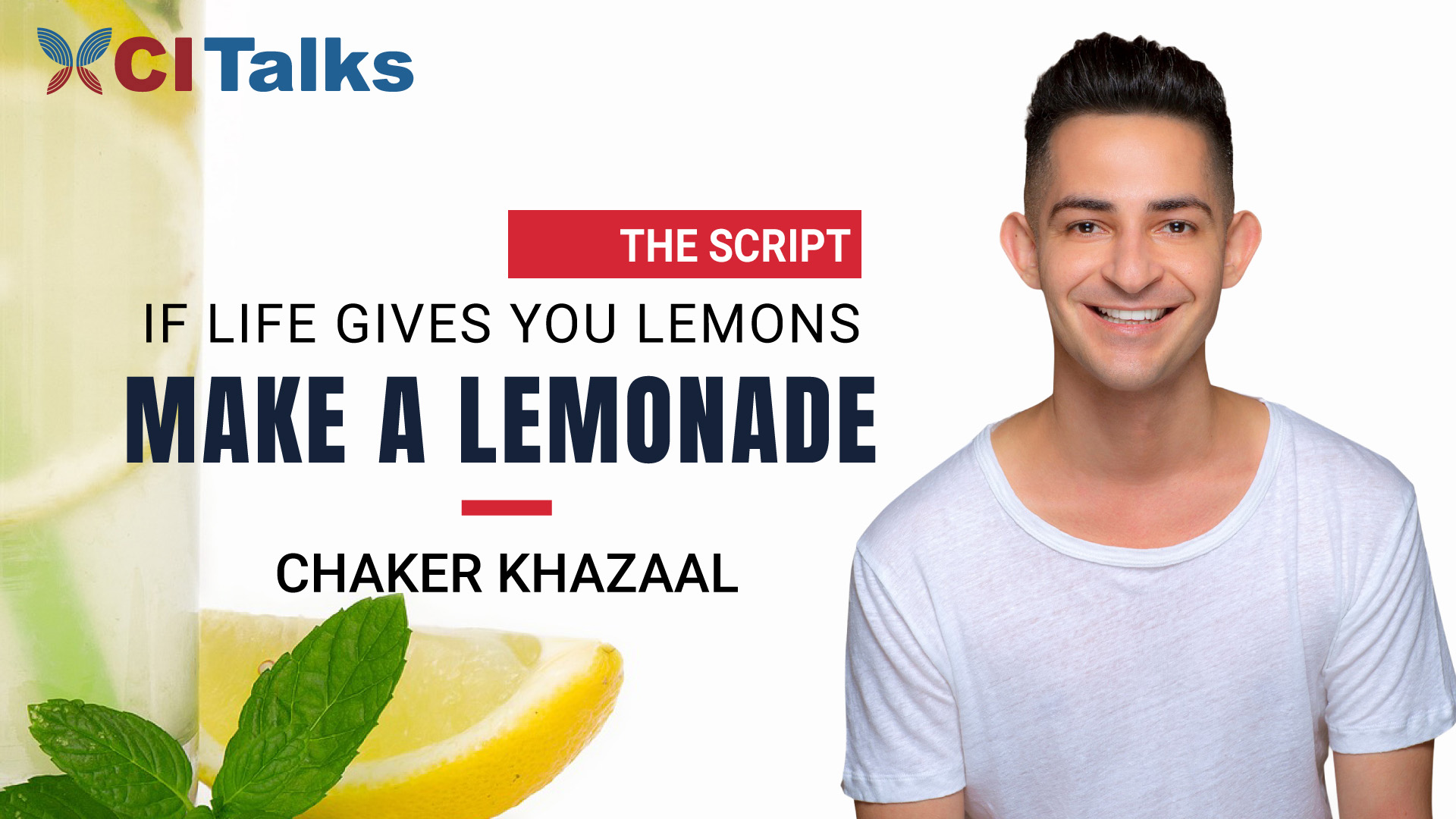 When life gives you lemons, you’ll either complain about the bitterness or you’ll make lemonade out of it, and I happen to be a person who loves lemonade. Who doesn't? My name is Chaker Khazaal, I'm a Palestinian, Lebanese, Canadian, New Yorker, Writer; Yes, all of these. Life has given me lemons at many instances in the last 33 years. Oh, I forgot to tell you. I’m 33 years old.

I was born a refugee. Ouch! And I grew up in a refugee camp. Now, that is bitter. But… this motivated me to seek opportunity elsewhere. This enabled me to look for a home for a nation to call my own. Now this is what I call some really good Canadian lemonade. I learned that the more lemons life gives you, the more lemonade you attempt to make, the better lemonade you end up making. Easy algorithm. No? Take my upbringing as an example. A child born in a refugee camp. Labelled stateless. Told that the world’s doors are always shut. Now, that’s sour. But no.

You’ll read in my memoirs that I did not wish to submit to defeat, so I ended up applying to so many scholarships, so, so many of them until I got one. And thanks to Canada and York University, finally found a home.

Take another example. My first book back in 2012, not a single publisher wanted to publish it. That was totally depressing. But I ended up asking a friend for help, lemonade had to be made, and a book had to be published and I learned all about self-publishing and the next thing you know, I am a best selling author. My books are everywhere. Now that must be some real good lemons, and real good lemonade.

And today with my company, OBCIDO. I help writers publish their books. See? Lemons, Lemonade.

Challenges… We only master them when we experience them and this comes with anxiety, with stress, with identity crisis. So apparently, this lemonade we have to make does come with a price. So when did I realize this? Only in the last couple of years, when a global pandemic brought us to the core, brought our human identity to question. It all went downhill. No lemons. No lemonade. We became prisoners of fear at a total standstill, uncertain about the future, and in struggle with the present. One day, two weeks, three months and it went on and on and on. Fear became depression, uncertainty was turned into insomnia, despair took over hope and mental struggles filled the place.

A few months into this down spiral, and while in Beirut, the 4th largest explosion in the world takes place just a few kilometers away. City damaged, soul destroyed. Then what? What do we do when circumstances have really weighed us down and how do we rise again? I had to break the silence. I had to break the stigma around the way I was feeling. I talked to a friend and I simply said, “I am not OK. I am struggling”. Because talking is healing.

When It Gets Rough, Become a Better Sailor

Light started coming in and it only takes one beam of light to brighten up an entire dark room. I have learned from life that when the waves get tougher, we just need to become better sailors.

For all of us, we only see founders in the best circumstances, when they're successful on stage, the...
30 Sep 2021

If Life Gives You Lemons Make a Lemonade

If Life Gives You Lemons Make a Lemonade

A remarkable, bittersweet story of Chaker Khazaal who was born stateless in a refugee camp and told that all doors to th...