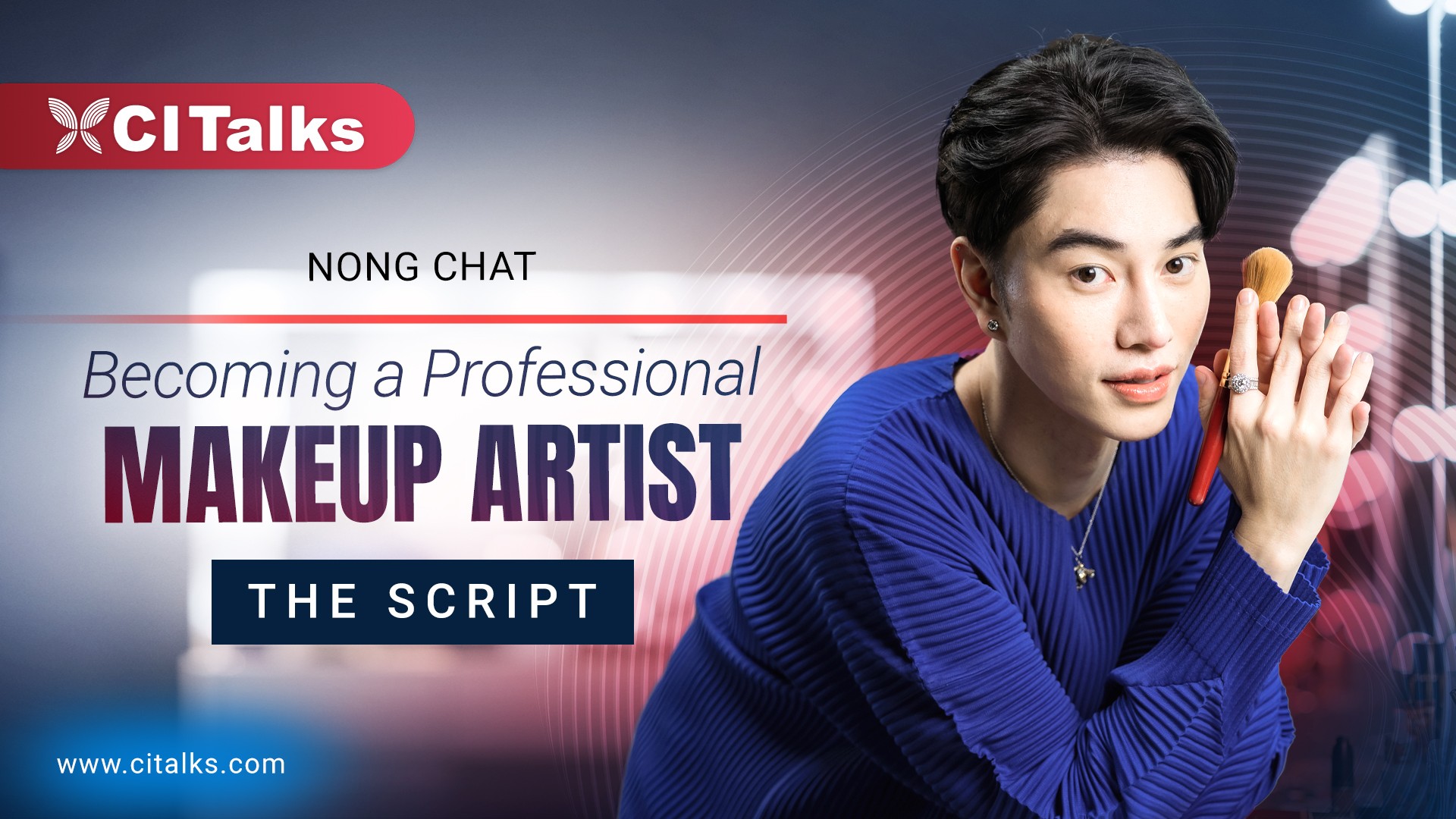 How I've got to where I am today is really beyond my dreams. Who would have thought that a kid who liked to do makeup, would one day become a leading professional makeup artist in Thailand.

I am an only child. So my parents expected a lot from me. My mum had a noodle stall at the school and my dad was an office worker. But we never spent much time together. There were family issues, adult issues between my parents.

But I didn't think that I was a troubled kid. I was still trying to be good and wanted to look after my parents to the best of my ability.

I have been into beauty since I was a child. When I was in Year 8 during a school break, I realized that I had a passion for doing makeup and hairstyling and that I wanted to pursue this as a career. So I asked my mum if I could take a course and she agreed. But because I was very young and still at school, the school’s term began half way through the course and I never had the opportunity to complete it.

I started by doing hair curling, perms and hair drying. People said "wait a minute, don’t you want to be a makeup artist? Why are you talking about hairdressing?". The truth is that I started out as a hairdresser because, even though I wanted to do makeup, it was quite expensive, given the price of cosmetics. I just didn’t have the money to spend on makeup.

So I applied for a job at a hairdresser's instead. I got a straight "no" answer because I was too young. I told my mum this and she said nevermind, she would lend her dressing table. That table was moved to the ground floor and my mum also bought me a shampoo bed.

At that time, the price for cut and dry was around 10-20 Baht, while hair straightening was 150 Baht. I spent the money I earned to attend a makeup course. I might look confident today but back then I used to get really confused about which cosmetics to use. I had so much to learn.

But with experience, getting things wrong and practicing until you get it right, you will begin to get better and improve.

My very first makeup assignment was for a friend who was in a beauty contest at college.

I ran the salon, which I had started when I was 13, after school and during holidays. Then I decided to go to college and study sales. I was lucky to have a tutor there, who was the head of the Thai Dancing Arts Club. She would ask me to do makeup for friends at college fairs. This gave me a chance to practice.

Another turning point was when I was in my third year of my vocational certificate. We had to apply what we had learned in class to actually engage in real world sales. This time I decided to be an intern at cosmetic counters. I phoned the big names, almost all of them, and one-by-one they said they didn't have an intern program.

There was one last number on my list and when I got through, I told them that I had basic makeup skills and wanted to learn as a trainee. I presented myself to the best of my ability. I didn't want to earn any money, I just wanted to do something I loved.

Do you know what they said? They said "OK let's meet" This sentence "OK let's meet" made my day. I was like wow, did they really accept me? I wanted to go and meet them straight away. In the end I did. And they accepted me as a trainee, paying 300 Baht. At the time, I wasn’t sure if that was 300 Baht a month, but money wasn’t what motivated me for this job.

It was so good that they had agreed to accept me. I still remember that they asked me to meet at Central Chidlom. I didn't even know where Central Chidlom was in Bangkok. When I got there, I was amazed at the luxury and the number of things for sale. I was so excited. It was so different from a local mall near me. My heart fluttered at the sight of the cosmetic counters. This led me into the world of publication.

Climbing the Ladder to Success

Another thing that helped me become one of Thailand's top makeup artists is social media. I posted my work on Facebook. At the time Facebook was still dominant, unlike today with Instagram, or IG, taking the lead.

With IG, I follow quite a few celebrities. Not many were on IG back then though. One day I commented on "Yaya Ying’s" Instagram that I wanted to do makeup for her. I didn't know whether she saw it or not until one day, I went to do makeup and hair for "Tak Bongkoj" and ran into Ying.

When I saw her, I said hi and she said that next time she would contact me to do her makeup and hair. I thought to myself that this was too good to be true.

Almost a month went by and then Ying’s manager called one day to ask me to do makeup for Ying. I said yes straight away and, on the day, I arrived with all my cosmetics and equipment for hairdressing. Many people knew me as a makeup artist and a hairdresser.

During the break, Ying came to me and asked whether I wanted to go to Cannes with her. I was like "Cannes where?". Did she mean Kanchanaburi? I had no idea!

I didn't think she was serious about taking me to Cannes so I told her that I needed to check my calendar. But really I had no need to check my schedule and could have gone there and then.

I was already imagining what Cannes would be like. I would do the best I could to make her beauty shine. Did you see how Ying looked at the event? Her hair was tied up and I used brown-nude makeup which was offset by Ying’s white dress.

The look was so striking and images of her in Cannes were shared on social media. Ying’s manager’s phone was constantly ringing and I started to get loads of requests to do makeup for all sorts of people and jobs.

I had no idea that this assignment and opportunity, given to me by Ying, would be one of one of my life's most significant turning points.

[Comments about Nong Chat from a young fan & follower] I've followed him for more than a year. I saw him doing makeup for celebrities and I like him a lot. I read every post and story and I actually met him. I'm so in awe!

If you are interested in becoming a professional makeup artist, watch this video with Nong Chat, one of Thailand's top p...